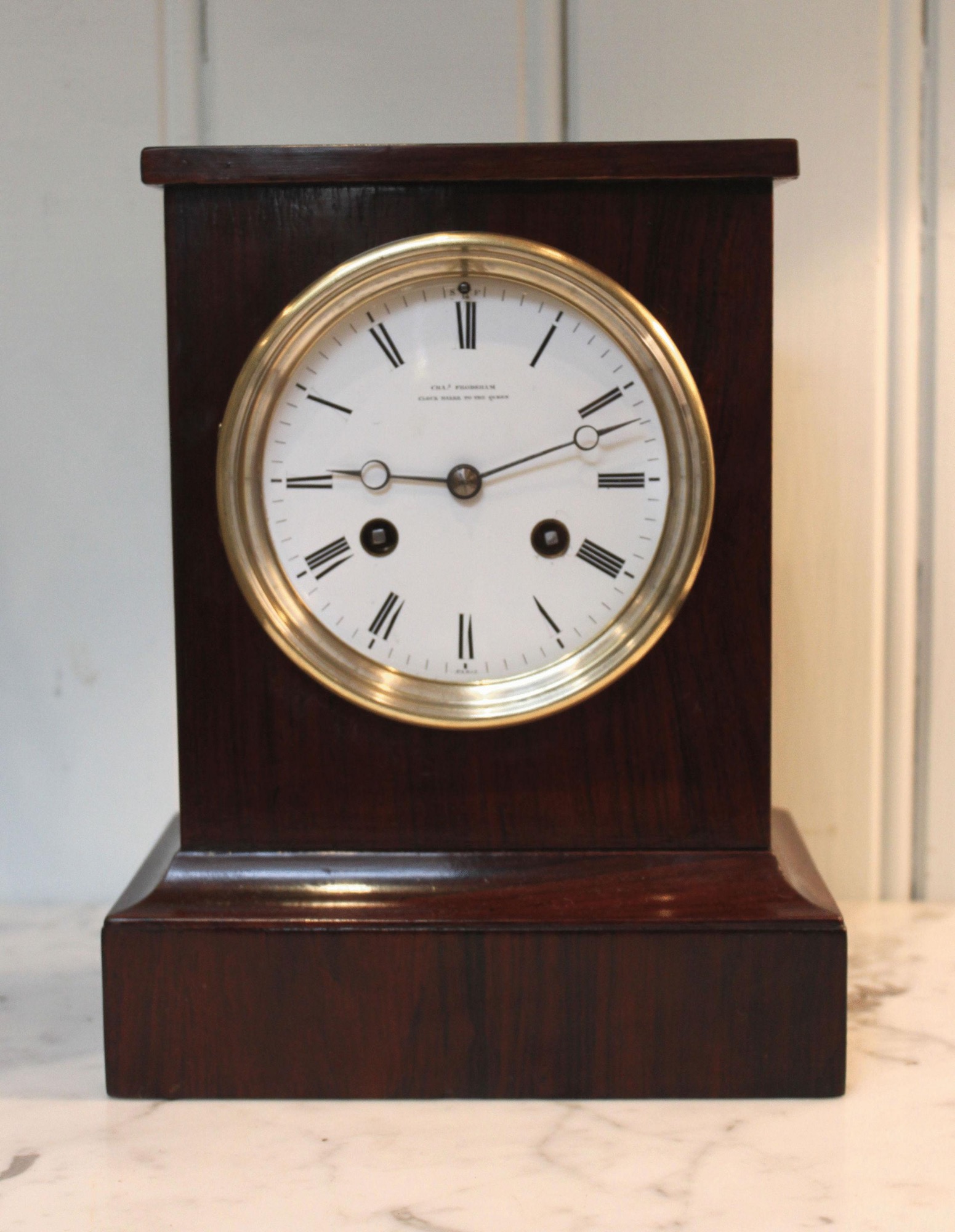 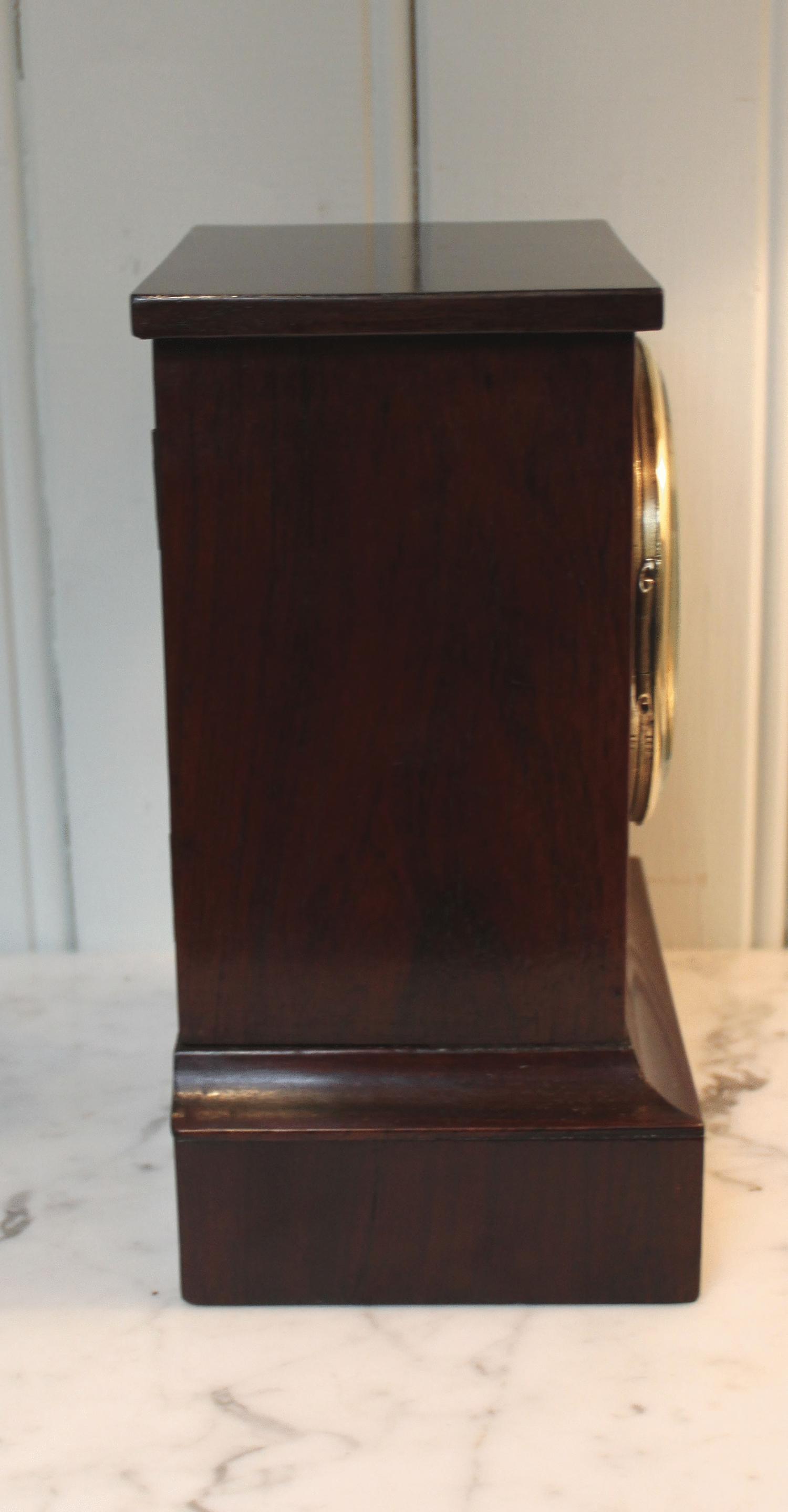 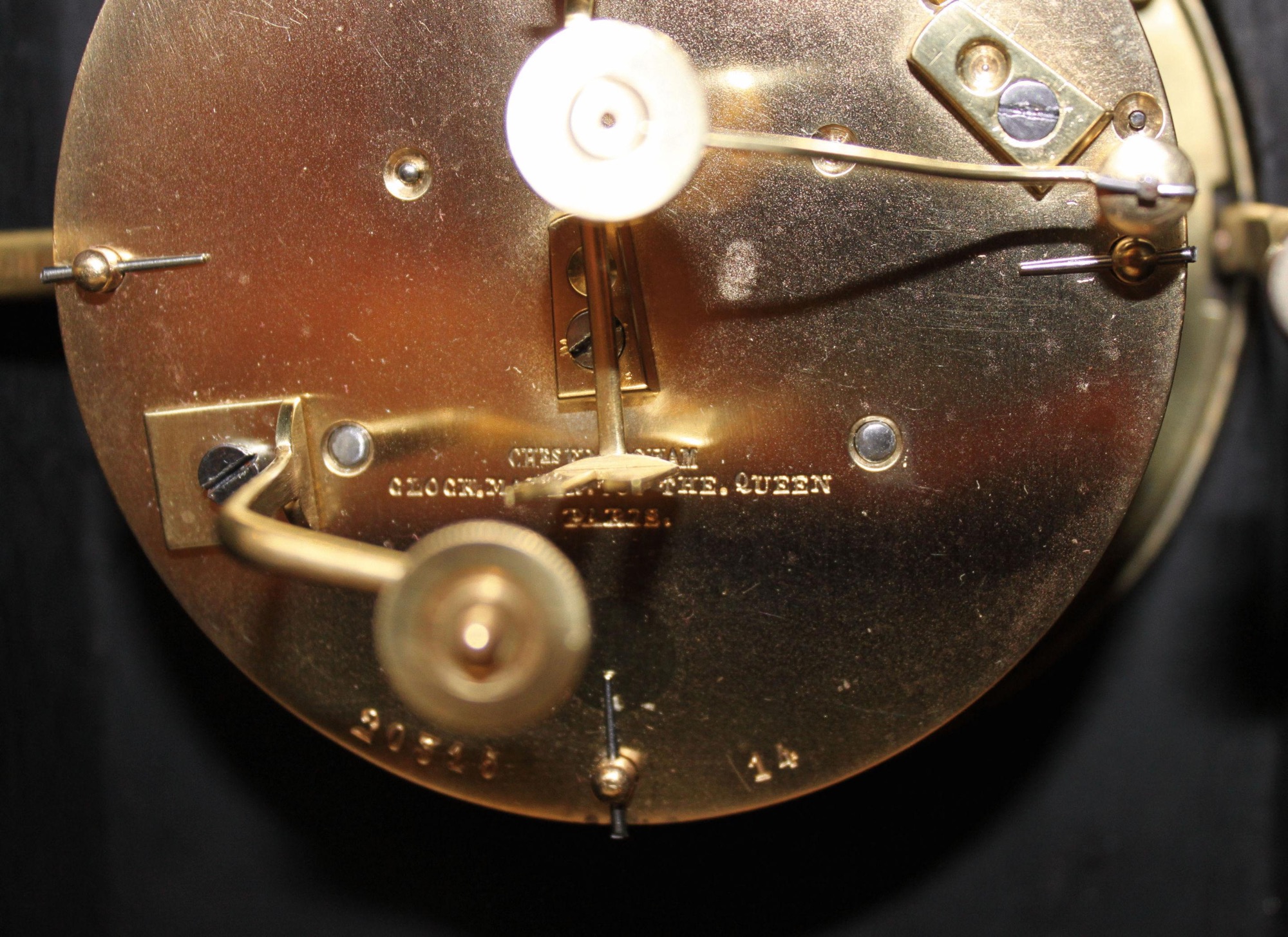 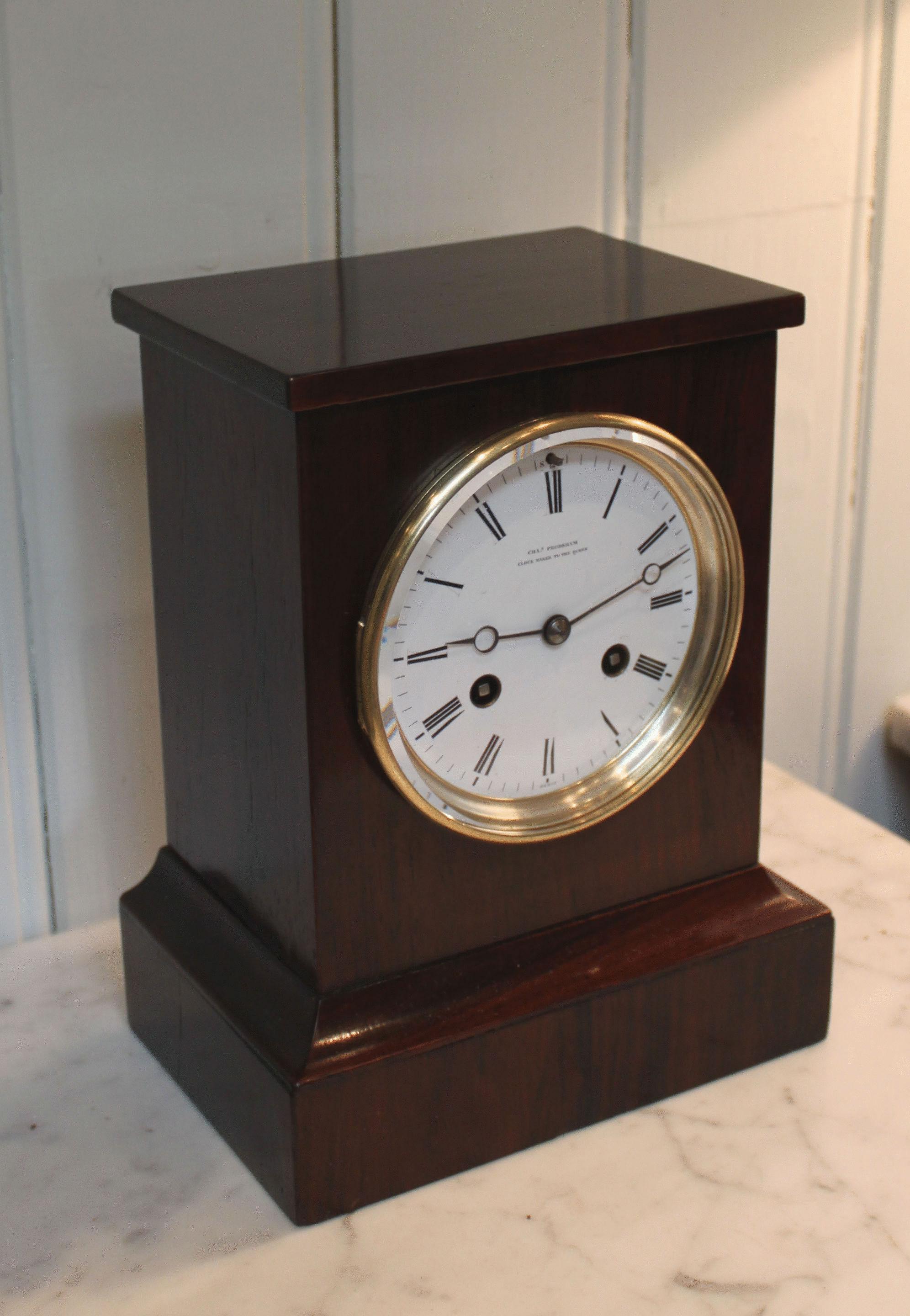 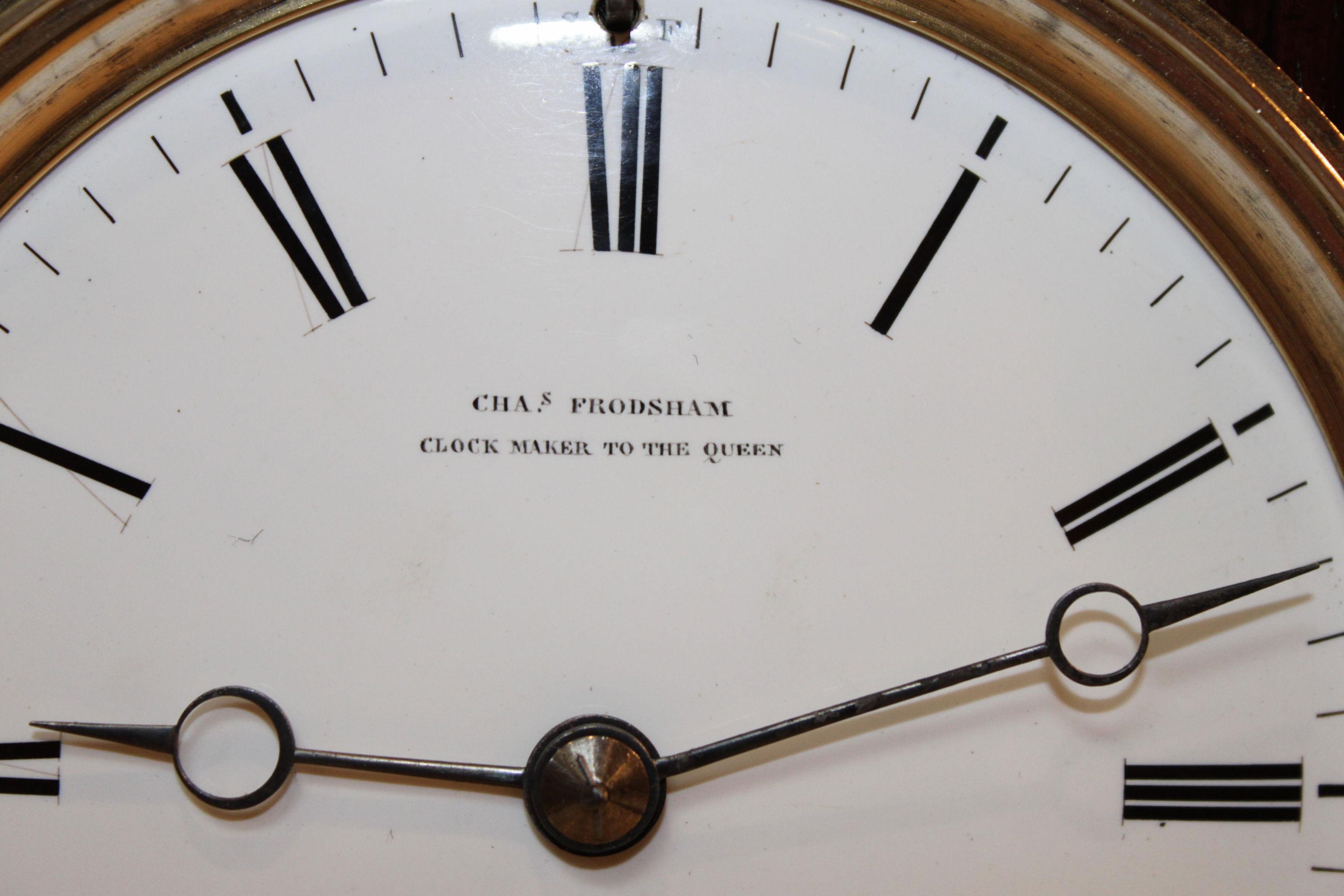 A high quality rosewood mantel clock, made and retailed by Charles Frodsham, Paris, Clock Maker to HM Queen Victoria. It has a plain rectangular case, with a clear white enamel dial, and a brass bezel with a bevel edge glass. The 8 day pendulum movement strikes the hours and halves on a bell. The movement is also Stamped by the maker/retailer.

Charles Frodsham, the founder of the company, was the son of William Frodsham an established London clockmaker. Charles was born on the 15th April 1810 and at the age of 14 he was apprenticed to his father for seven years. At twenty, Charles distinguished himself by submitting one of his first marine chronometers to the Premium trials at Greenwich Observatory, receiving the second prize of £170. In 1834 he was made a fellow of the Royal Astronomical Society. Shortly after and doubtless encouraged by his recent successes, Charles ventured out on his own establishing his business in London.

Charles gained an enviable reputation for the manufacture of precision timekeepers, both as a supplier of marine chronometers to the Admiralty, and as provider of fine watches and regulators to discerning clients worldwide. He later acquired three prestigious businesses, that of, J.R. Arnold, Vulliamy and William Johnson late of Grimalde & Johnson.

In 1854 the firm was granted the Royal Warrant and made keeper of Her Majesty's clocks. For over 125 years Charles Frodsham & Co. were responsible for the maintenance of the Royal clocks and remained the last independent clockmakers permitted to have workshops in Buckingham Palace.

Throughout the second half of the 19th Century the firm of Charles Frodsham exhibited at all the major International Exhibitions - including, Paris, Philadelphia, Sydney and the Great Exhibition of 1851 at Crystal Palace, where a first class medal was received. In all, Frodshams obtained fourteen medals and diplomas.

From 1850 the majority of the finest Frodsham watches were distinguished with the code AD fmsz. Many of these pieces were sent to Kew Observatory for rigorous timing tests, attaining consistently high marks, with one tourbillon watch holding the record in 1906 with a mark of 93.9.

Charles Frodsham & Co. became a limited company in 1893. With the advent of the motor car in the early part of the 20th Century, the business expanded with the introduction of speedometers. From the late 1940's through to the '80s, the firm concentrated on the production of mantel and carriage clocks, producing amongst other things the 'Princess' clock presented in 1947 to HRH Princess Elizabeth on the occasion of her marriage. Today Charles Frodsham & Co. proudly maintains the exacting standards and enthusiasm of its founder, Charles Frodsham.

A fuller account of the life and times of Charles Frodsham and the company can be found in The Frodshams, The Story of a Family of Clockmakers by Vaudrey Mercer, Published by The Antiquarian Horological Society, 1981.

Please note that not all items are on display in our showrooms and may be in our off-site store. If you wish to see specific items please notify us before visiting so that we can ensure the item(s) are available to view.

Thank you for your enquiry.

We will get back to you soon.